Good morning everyone (or afternoon or evening depending on where you are and when you are reading this),

I just wanted to touch base and let you all know what I have been up to. I recently changed jobs within my company and have been swamped in training so have not been putting much time or effort into my books, but I feel like I am almost ready to get back into it. Now I just have to remember how.

I had an internet radio show interview once where the interviewer asked my about my method to writing. I will share it with you now, but not for wholly unselfish reasons. I figure if I start writing it down, then it will come back to me. 🙂

So, I am not a planner. Yes I will work on some character names and descriptions and approximate roles to my books, but beyond that I prefer to work more organically. I have a premise of what I would like to see happen in my books but they do not always work out that way. Once I start writing, my characters take on a life of their own. They lead the story. I have had many characters die who I had intended keeping around for a while or strange love interests that were never intended. It really comes down to my mood while I am writing and just where the story takes me.

What happens when the story doesn’t take me anywhere? When it begs for micromanagement or at least some direction? That’s when I step away from the pages and move toward the table top and some dice or to some online version of the same. Some of my best stories were based on role playing games (RPG) such as Dark and Shattered Lands, which is text based RPG (also called a MUD) . I kick off some scenarios and the players react to them and soon enough, a story is writing itself.

This go round, there aren’t currently any MUDs out there that have what I need for the multi-genre adventure that I am wanting to write. No, this one will have to go to the table top. I will be gathering up some friends and even a few strangers from a few game boards (need to make it unpredictable) and hammer out the characters and storyline by actually playing it out. This adds the benefit of multiple perspectives, and way unpredictable outcomes. Right now I do have to do some planning however. I need to create a whole world, as I never know where the players will wind up or what direction they will take. NPCs (non-player characters), Towns, kingdoms, jungles, monsters, demographics, landmarks, abilities, etc. There is a lot that goes into creating a world for your story to come to life in. I’ve enlisted my teenage son to help me get a map in order. I gave him some very vague direction so it will be awesome to see what he comes up with. Once I have a map, then I can really begin.

I will let you know how the process goes and may even introduce you to a few of our characters and/or some excerpts of the story, or area descriptions. So stay tuned and as always, I welcome any discussion you may want to have regarding my methods or anything else really. I love meeting new people and geeking out with them so feel free to reach out.

So I have three different series I want to start writing. The first one is a continuation of the Dark and Shattered Lands series. This time the focus will be on the bad guys. Thinking titles like The Price of Dishonor, The Price of Deceit, and The Price of Hate. Not sold on those titles just yet, but we will see how things play out.

For the players of Dark and Shattered Lands, they will recognize at least one of these vile villains, but the other two, they were actually two of my alternate characters that I used to stir up stuff from time to time. They may not have had a big role in the game, but in their own little world, they were quite evil so we will see if I can work up enough of a story for them to complete a novel each. Gryko, my ultimate villain, I could write volumes on him.

The second series is based on a MUD I almost started. I had the full story line planned out, even had the whole thing built and coded, but for some reason I can’t remember, I just let it all fall by the wayside. Fortunately, I remember the storyline and there is a ton I can do with it. Stay tuned for The Lure of the Mana Stone.

Finally, I had already started this final book but just kind of lost my creative edge about a quarter of the way through it. I just wasn’t feeling inspired. 13 chapters in and I just couldn’t seem to get back to it. It is too good of a story to let drop though.

The first two series will be epic fantasy. The last one is more of an Urban Fantasy series. Hopefully one day I can get back to it. I’ll let you know if that happens. Anyway, feeling a little inspired, so maybe if I try hard enough, put on the right music, get centered, I can make this all happen. Wish me luck.

Ok, this is my first review of an Indie author, so forgive me if it seems a bit disjoined. I am new to reading Indie titles, but as an Indie author myself, I feel I should be supporting those folks who have the same hopes and dreams that I do.

First, a little about C. W. Johnson. I was browsing around Amazon looking for something new to read when I came across an interesting title. The Son Of Man. It immediately caught my eye. So I opened up the reviews and read a little more. It winds up, C. W. was a travelling musician and found inspiration for his book in an old town in Germany (the oldest standing) called Rothenberg. Having just come back from a visit to Germany, including Rothenberg, my interest was piqued. He had visited the Cathedral of the Holy Blood Altar which is reputed to have a vial containing three drops of the blood of Jesus. I thought to myself while reading his bio, I would have had the same thoughts that he did upon learning that there was preserved blood of Jesus out there. “What if someone used it to clone him?” Well, he took off with that thought and a series of exciting novels followed. I also found it interesting that the writing of his first sounded a lot like mine. False starts, rewrites, and years of editing. I could completely relate with this guy.

Now, on to the book, The Son of Man. Available on Amazon.com.

As many first time Indie books seems to do, my own included, the story started slow. However, it was not long before it had ramped up into a real page turner. Before I knew it, I had torn through all 470 pages and found myself yearning for the next book.

In the story, the blood of Jesus is tested against tissue from the Shroud of Turin and it is found to be a match confirming they both contained the DNA of Jesus. With that discovery, it did not take long for man to decide to clone him, they just needed a virgin to carry the embryo. Maria, an exceptionally beautiful, yet asexual woman chooses Todd to help her raise the experiment. Todd is infatuated with Maria and because of her sexuality, or lack thereof, is quite frustrated. But he loves her more than life and is willing to live a celebate life if it means he gets to live it with her. Now, spoiler alert for all of you out there shaking your heads, they do eventually consummate their marriage and from the sound of it, it was worth the wait. But I digress.

The story continues as they find themselves at odds with the sponsors of the project and ultimately, on the run. They are pursued by a religious sect called the Vinces who would have the cloned Jesus raised the way they want him to be raised even if it means kidnapping the mother until the child can be raised without her. The world, especially North America, is suddenly under the threat of an enormous asteroid heading toward it and this thrusts everything into Chaos.

I don’t want to go to deep into the story because I don’t feel I will do it justice and I would rather you read it and enjoyed the suspense as I did. Suffice it to say, there are a lot of plot twists, many other well developed characters and an all around excellent story.

I would like to take note, however, of something I noticed in the reviews. This book has a polarized audience. Many are calling it Christian fiction and are speaking out against its biblical accuracy and others about how mean God is, or whatnot. First, I want to say if you take an author’s fiction and then base your faith or lack of faith on it, then you really need to quit reading fiction. Or join the church of scientology where you can be among other like minded folks. If you think this book is meant to be another “Left Behind” series then I feel you are missing the point. I think this book was meant to be a fictional suspense thriller that simply takes a somewhat taboo topic or in this case two taboo topics, and turns it into a fun and thought provoking ride. I don’t feel C. W. was trying to rewrite the Revelations, but I do think the story will make you consider that this actually could be the way it goes.

As a Christian, I put my stock into the words of the bible. For my entertainment, however, I read fiction and this fictional piece kept me entertained. I gave it 5 stars on Amazon and I stand by it now. I look forward to what’s next from this excellent author.

I would also like to thank Denise Baer for her Indie Author Pay it forward program. You can read more about her and her program at http://skippingstonememories.blogspot.com/.

Welcome to the official web site of author Gus Gallows.

Take your time and look around. Better yet, buy one of his books. He loves it when you do that. Isn’t that what the world needs now? More love? Do it for the world. 🙂 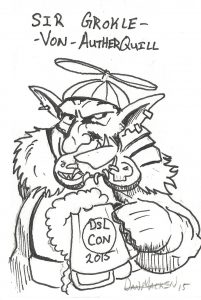